15%
DISCOUNT
ON YOUR NEXT PURCHASE

No thanks, I reject this offer

1. Is vaping a gateway to smoking for kids?

No, despite a great deal of hype from the US, the facts are very different. Although there is a rise in e cigarette use among school age adolescents, that does not prove anything bad is happening – it simply mirrors what is going on in adult society. Whether it is harmful depends what you think would have happened in the absence of e-cigarettes. It is quite possible that e cigarette use is displacing smoking in adolescents. Even where they have never smoked it might be acting as an alternative to taking up smoking. For there to be any real harm, you would need to show that students were taking up vaping and then going on to develop a life-long smoking habit, because of the vaping. In fact in the data presented from the US there were much more encouraging signs: e cigarette use was a small fraction of the smoking rate among school students; the rise of e cigarette use coincided with a much larger drop in smoking; and e-cigarettes use was concentrated among those already smoking. Here is the full picture in graphic form:

The people who claim this need to explain carefully how they think one activity can normalise another, especially when these alternatives involve products in competition. It is more likely, and should be assumed in the absence of evidence to the contrary, that vaping normalises vaping, which is an alternative to smoking – and therefore normalises not smoking. High level support for this comes from one of the world’s experts in smoking cessation, based on UK survey data:
“Evidence conflicts with the view that electronic cigarettes are undermining tobacco control or ‘renormalizing’ smoking, and they may be contributing to a reduction in smoking prevalence through increased success at quitting smoking”.
(Professor Robert West: Trends in e-cigarette use, presentation to European Conference on Tobacco or Health)

3. Can e-cigarettes save lives?

This is a matter of simple logic. If smoking is dangerous and may kill potentially one billion people in the 21st Century, then if people substitute cigarettes for products that do not have the main thing that causes the risks (burning organic material and inhalation of smoke) then they will be at greatly reduced risk. It’s hard to know exactly what the risks are relative to smoking – some people can see no obvious pathway whereby they would cause death. One expert ‘multi-criteria decision analysis’ put the health risks at around 1% (or 3% if you include ‘addiction’ as a health risk, which is a debating point). This is how they compare different nicotine products (Nutt D et al, 2014) – e-cigarettes are included in ENDS – electronic nicotine delivery systems: 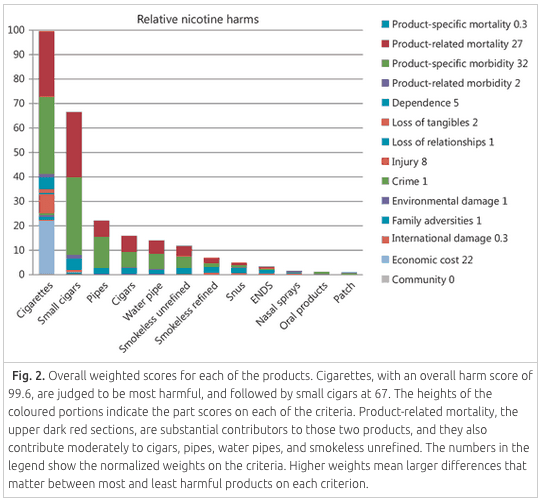 Fifty three scientists and other experts wrote to the WHO Director General, Margaret Chan to say in their letter of 26 May 2014:
“There are now rapid developments in nicotine-based products that can effectively substitute for cigarettes but with very low risks. These include for example, e-cigarettes and other vapour products, low-nitrosamine smokeless tobacco such as snus, and other low-risk non-combustible nicotine or tobacco products that may become viable alternatives to smoking in the future. Taken together, these tobacco harm reduction products could play a significant role in meeting the 2025 UN non-communicable disease (NCD) objectives by driving down smoking prevalence and cigarette consumption”.
“The potential for tobacco harm reduction products to reduce the burden of smoking related disease is very large, and these products could be among the most significant health innovations of the 21st Century – perhaps saving hundreds of millions of lives. The urge to control and suppress them as tobacco products should be resisted and instead regulation that is fit for purpose and designed to realise the potential should be championed by WHO”.

To use our website you have to be aged 18 years or over.

Please verify your age to enter the site:

As you have confirmed you are under 18, you are now being directed to Google.